Of the subset of people who are into computers, there is a smaller subset (although bigger than you might think) that are into vintage computers. Of that subset, there’s a significant proportion with a specific affinity for old Apple hardware. Of that subset, there’s a smaller subset that are into restoring and preserving said hardware. For that group of people, something like a Lisa (the immediate precursor to the Macintosh) or a NeXT Cube (Steve Jobs follow-up to the Macintosh, after he was kicked out of Apple) holds special value. Something like an original Apple I board holds practically infinite value.

If you are in this sub-sub-sub-group of people, then you have undoubtedly come across the eBay auctions of one Dr. Stephen Buggie. You’ll know you’ve purchased something from him, because whether its as big as a power supply or as small as a single key from a keyboard, it comes packed with memorabilia of either the Apple II, or his other hobby, hunting for radioactive material in the New Mexico desert. Hand-written, photocopied, or on a floppy disc or DVD, he always includes these small gifts of obscura.

Last year, after the fifth or sixth time one of his eBay auctions helped me rescue an Apple II machine I was restoring, I reached out to Dr. Buggie and asked him if I could interview him for my blog. His online presence outside of eBay is relatively small. Of of the few places you can find him is on YouTube, presenting at KansasFest, an annual meeting of sub-sub-sub-group nerds entirely focused on the Apple II line-up of computers. Not all of these folks are into restoration. Some are creating brand new inventions that extend the useful life of this 40+ year-old hardware. Some have been using the hardware continuously for 40+ years, and still live the early PC wars, full of upstarts like Atari, Commodore and Amiga, gearing up for battle against IBM.  Many still see the Macintosh as a usurper, and pledge more allegiance to the machine that Wozniak wrought than the platform that begot the MacBook, iPhone and other iJewelry that all the cool kids line up for today. If you search really hard, you may even find references to Dr. Buggie’s actual, although former, professional life: that of a world-traveling psychology professor. What you won’t find is any sort of social media presence — Facebook and Twitter don’t work on an Apple II, so Dr. Buggie doesn’t have much use for them.

What I wanted to know most from Buggie was why Apple II? Why, after so many generations of computer technology had come and gone, is a retired professor still fixing up, using and sourcing parts for, a long-dead computer platform? I don’t think I got a straight answer to that: he likes bringing the Apple //c camping, because the portable form-factor and external power supply make it easy to connect and use in his camper. He likes the ][e because he used it in his classroom for decades and has specialized software for teaching and research. But as for why Apple II at all… well mostly his reasons are inexplicable — at least in the face of the upgrade treadmill that Intel, Apple and the rest of the industry have conspired to set us all on. He uses his wife’s Dell to post things on eBay, and while still connected to the University, he acquiesced to having a more modern iMac installed when the I.T. department told him they would no longer support his Apple II. But if it was up to him, all of Dr. Buggie’s computing would probably happen on an Apple II…

OK, But What is an Apple II?

It’s probably worth pausing for a little history lesson, for the uninitiated. The Apple II was the second computer shipped by Steve’s Jobs and Wozniak in the late 70s. Their first computer, the Apple I (or just Apple) was a bare logic board intended for the hobbyist. It had everything you needed to make your own computer… except a case, power supply, keyboard, storage device or display! The Apple II changed everything. When it hit the market as a consumer-friendly device complete in a well-made plastic case, with an integrated power-supply and keyboard, that could be hooked up to any household TV set, it was a revolution. With very little room for debate, most would agree that the Apple II was the first real personal computer.

As with any technology, there were multiple iterations improving on the original. But each retained a reasonable degree of compatibility with previous hardware and software, establishing the Apple II as a platform with serious longevity – lasting more than a decade of shipping product. As it aged, Apple understood it would eventually need a successor, and embarked on multiple projects to accomplish that goal. The Apple III flopped, and Steve Jobs’ first pet project, the graphical-UI based Lisa was far too expensive for the mainstream. It wasn’t until Jobs got hold of a skunkworks projects led by Jef Raskin that the Macintosh as we know it was born. By then, Apple II was an institution; an aging, but solid bedrock of personal computing. 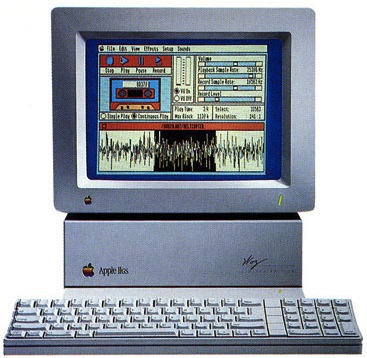 The swan song of the Apple II platform was called the IIGS (the letters stood for Graphics and Sound), which supported most of the original Apple II software line-up, but introduced a GUI based on the Macintosh OS — except in color! The GS was packed with typical Wozniak wizardry, relying less on brute computing power (since Jobs insisted its clock speed be limited to avoid competing with the Macintosh) and more on clever tricks to coax almost magical capabilities out of the hardware (just try using a GS without its companion monitor, and you’ll see how much finesse went into making the hardware shine!)

But architecture, implementation, and company politics aside, there was one very big difference between the Apple II and the Macintosh. And although he may not say it outright, I believe it’s this difference that kept the flame alive for Stephen Buggie, and so many other like-minded nerds.

That key difference? You could pop the top off.

I’ll cover why that’s important — both then and now — and more about my chat with Dr. Buggie in Part 2…

One thought on “Maintainers of Lightning – Part 1”