Running the penultimate non-PPC Motorola CPU, the 68030, but limited to a 16-bit data path, the CC is poky on later versions of System 7, but runs well on 7.1. Its display does 256 colors, but at a non-standard resolution that prevented it from playing a significant subset of color Mac games (although its possible to work around with a pretty heavy-duty hardware mod that ups the display to 640×480). The CC shares a logic board design with the 68040-based Performa/LC 57x series boards, allowing a drop-in logic board upgrade dubbed “Mystic.” For those who don’t mind losing the back cover, the “Takky” upgrade involves installing a logic board from even later Macs, including PowerPCs, but requires some modification.

I chose to leave my Color Classic as close to stock as possible. It came from someone on a Facebook group who had two dead ones he was looking to unload. He sold it to me for $100 shipped, and it arrived yellowed, and covered in stickers and sticker residue, but with almost no damage to the case — and no clock battery leakage. Of course, none of that good news meant it would turn on. Cleaning the logic board and leaving it plugged in for 24 hours resulted in slight signs of life, but I couldn’t get it powered up until I thoroughly bathed the logic board (then thoroughly dried it.) After that, it booted exactly once — then the hard drive failed completely.

Still, that was enough to suggest it was salvageable. The fact that washing the board had an impact meant that the surface mount capacitors were leaking. This being my first experience with SMDs, I watched a solid two hours of YouTube videos covering a variety of techniques for removal, then practiced on a garbage board. I settled on the “snip, twist and pull” approach, to minimize the chance of trace damage. Soldering new ones on was a little more delicate then through-hole caps, but nothing I couldn’t handle. A full set of replacements was done over the course of an afternoon, and after another 8 hours plugged in, some cleaned drive heads, and a carefully built floppy boot disk, it was back to life!

Next came the analog board — the need to be plugged-in for a long time indicated that those caps were at the end of their life too. While getting the analog board out was a pain in the butt, re-capping moved quickly. While I retro-brighted the case back to something closer to it’s original color, I re-capped half the board, and marked the ones I’d replaced, and tested it out. Everything worked, so the next day, I started the second half. With the final set replaced, I re-assembled my Color Classic and was delighted that there was no “charge up” period required — the Mac chimed instantly… then the screen turned a bright white, with lines through it. I yanked the power in terror, took it apart and quadruple checked the rating and polarity on every single capacitor, then re-assembled and tried again. I got the same result, but this time I put the boot disk in — and found that Mac whirred away at the floppy, booting happily. I was puzzled, and felt defeated. Soon afterward, my health took a turn, and the Color Classic ended up left in pieces on my work table for two months…

Finally last week I felt up to re-visiting this project. I found someone willing to sell a replacement analog board, if all else failed, but I was determined to figure out what had gone wrong. I knew everything worked after 2/3rds of the re-capping was done, so at least the potential surface area for error was small. I fired it up again, and watched the slow floppy boot, then set up my multimeter to try to read voltage from some of the ports. As I did, the Mac settled into the desktop and the faintest shadow of the Apple Menu appeared in the top left corner of the screen! 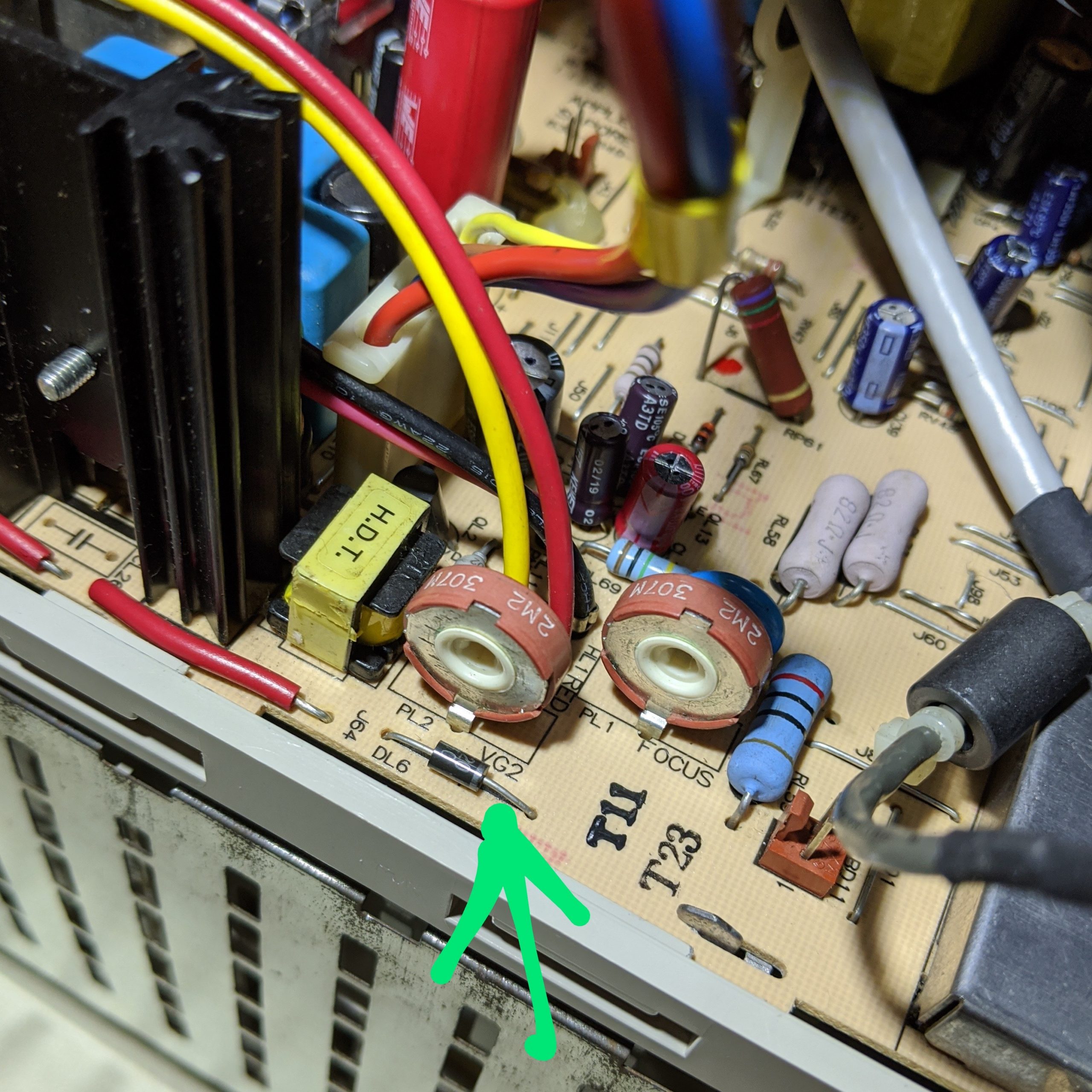 It turns out I hadn’t made an error at all. Some previous owner had cranked the display voltage (probably to try to extend the life of the old capacitors). A careful high-voltage adjustment with a plastic tool, and the picture resolved to something useable. More adjustments were needed, but the Mac was alive — and had been the whole time! All that was left was to find a working hard drive. Most SCSI drives of the era either have failed, or are about to, so I decided to go with a SCSI2SD v5.1. I loaded it into an external enclosure, and after some fiddling in Lido and some back and forth loading some bits from my Mac Plus, the Color Classic was happy. I had to 3D print an adapter to get the SCSI2SD onto the drive tray, but it fits in there solid, and provides more than 4GB of solid state storage.

I found an Farallon PDS network card on eBay, along with a driver floppy, and quickly got the Color Classic onto my AppleTalk network so I could pull some apps and games off my other Macs. I also loaded up a Recovery partition with the System 7.1 installer and necessary System Enabler — since it had been a pain in the butt to find. After a solid 8 hours of burn in, and a few more screen tweaks, this classy Color Classic runs like a dream. A few days later, it found a decent price, and a good home, with an eBay buyer who’d been trying to get a Color Mac of his own for quite some time.

One thought on “Macintosh Color Classic”