This virus has drawn some truly amazing behavior out of us as a society, hasn’t it? We’ve seen leaders step up and take decisive action to protect people. We’ve seen science and medical professionals rise to the challenge of treating patients and finding cures. We’ve seen people learn new ways to connect and stay in touch with their loved ones. There’s been a lot to commend us.

But we’ve also seen a lot of really spiteful behavior. We have a president desperately deflecting responsibility for failures, while smirkingly taking credit for small victories that he had nothing to do with. We’ve seen people putting the lives of others at risk to impotently protest the actions designed to keep them safe. And we’ve seen a whole new wave of virulent misinformation and loathsome deception spread across the internet.

I want to give those who act on, and share, these absurd ideas some grace. Most of those doing the sharing are squarely in Dunning-Kruger territory — possessing a false confidence that comes from knowing a little bit about a subject, but not enough to understand how much information they’re missing. I also realize that fear drives people to lash out, and that things they don’t fully understand (like how cell phone towers or viruses work) make prime targets for irrational reactions.

I want to give them some grace, but when you see pictures of nurses calmly blocking an intersection in front of a hospital, literally using their bodies to protect the sick from the misguided protestors who think their rights are being impinged… I just haven’t got any grace left to offer. 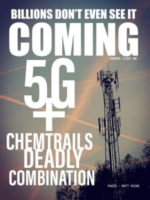 In 2009 the FCC ended the broadcast of analog television content, freeing up radio spectrum that had been reserved for this kind of broadcast since at least 1949. 5G is the result of this, and other moves, to re-purpose existing radio frequencies for advanced wireless services. What this means is that the very signals people are afraid of right now have been around for over 70 years! Instead of carrying TV content, those radio waves are carrying Internet data packets, but its still just modulated data. Modulated data cannot be used to transmit or activate a biological virus. It can, however, be used to spread fear and misinformation.

In 2000, one of the world’s most successful business leaders redirected his considerable brain power and money from selling software to solving problems with sewage treatment and medical infrastructure in third world countries. Bill and Melinda Gates could do literally anything they wanted, and they chose to invest their time in helping people deal with poop. In 2015, after fighting the spread of disease for 15 years, Bill warned everyone that we were unprepared for a global pandemic, and that we were heading for trouble. 4 years later, we got trouble, and within weeks people are blaming the person who predicted it would happen, and insisting on their right to be reckless with other people’s lives.

These things are frustrating, because obviously they’re stupid. Obviously no rational person would believe that Bill Gates is using 5G radio signals to cause a pandemic so he can lock people in their houses and take over the world… Except that rational people are actually sharing these ideas like they’re truth. And I can’t escape the correlation that its the people who are most impacted economically, and who have the least formal education, that are the ones spreading these poisonous ideas. I know it sounds arrogant, but it shouldn’t be wrong to point out when someone is doing something stupid out of ignorance and fear. As much as I have been a proponent of, and participant in, a free and open Internet, I am opposed to the distribution and glorification of ignorance.

Conspiracy theories are fun intellectual exercises — they’re a “what if” exploration, that in better times make for good entertainment (I mean, who didn’t love the X-Files in the 90s?) But they are not news, they are not supportable with science and research, and they should not be shared with the same weight or given the same attention as actual information. If you see something on the Internet that sounds like it explains a part of the world you don’t understand, you owe it to yourself, to your social media connections, and to civilization as a whole, to respond responsibly. You can either:

A) Pursue a degree in the topic from an accredited higher education institution, or seek out 3-5 years of equivalent on-the-job experience. Because yes, its hard work to develop actual expertise.

B) Shut up, admit to yourself you are not competent on the matter, and acknowledge that your opinion is not worth the bytes of memory it gets stored on.

I have more to say on professional sources of opinion (so called “news”) but I’ll save that for another post — suffice it to say, yes, there is an alternative to the “main stream” media that doesn’t foment conspiracy theories. But instead of going into that right now, I’m going to close this with an additional admonishment to those who follow Jesus. As Christians, the standard for Godly wisdom is clearly provided for us in the book of James:

Wisdom from above is first of all pure, then peace-loving, gentle, accommodating, full of mercy and good fruit, impartial, and sincere.

If what you’re reading is not reasonable, not impartial, and not peace-loving, don’t share it. You damage your testimony by embracing hateful opinions. You malign your Savior by spreading fear. And worst of all, your gullibility makes your faith look foolish.

3 thoughts on “On Protests and Conspiracy Theories”