The first in a new line of computers, later called the 128k, but originally just “Macintosh“, this is the computer that really started the revolution in 1984. An appliance-like machine, not intended for tinkerers, but to remain sealed, the Mac project was guided primarily by Steve Jobs. Famously created by a talented team in a remote building flying a pirate flag, this little box really did change the world.

My first commission, this unit came from a sell-off of Syd Bolton’s Ontario, Canada PC Museum after he passed. When I first got it, it would power up, but the floppy drive was missing, and after a couple starts the screen stayed blank and the happy chime wouldn’t play. I started with the usual suspects, re-capping the logic board and re-soldering the flyback transformer, but to no avail. Finally I swapped in my own Mac Plus logic board… and the unit booted right up. Culprit found.

I replaced a few chips on the original logic board but continued to find no signs of life, so after months, finally found a replacement board on eBay for $45. It was sold as original, but turned out to have a (fairly expert) 512k upgrade soldered on. While I waited for it to arrive, it was time for a gentle retro-bright soak in the sun — a little liquid peroxide and a lot of hot water rendered a consistent look everywhere…except the space bar.

When the logic board was replaced and the system was stable, I set out to do some burn in… and found the picture deteriorating after an hour or so of run time. A replacement flyback was required, which I pillaged from a parts machine, along with a floppy drive — although I needed to buy a new mounting bracket online for around $20. Finally the machine was happy with extended run time.

I lubricated floppy drive — a little different on the old 400k drives — and cleaned the heads. The client sent a keyboard and mouse he found online. The mouse turned out to be for an Apple IIC, so I traded him for my own spare mouse, and I had a complete, mostly original unit that functioned fully!

Building a boot disk was the next challenge. I have a cache of old System disks from my youth, but I didn’t want to ship those away. With only a single floppy drive, a lot of disk swapping would be in order, so I leveraged my Floppy-Emu and my own restored Mac Plus to set-up a 400k floppy that had a bare System and MacPaint and MacWrite on it, with about 4k to spare. 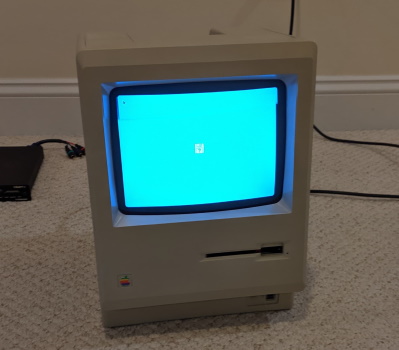 As you can see in the pictures above, the screen size was initially a little bigger than stock. Adjustment proved difficult, since the pot had crumbled with age. Eventually I managed to shrink it a little with a carefully carved stick (a scary experience that prompted me to buy some plastic adjustment tools!)

The M0001, and the parts machine I drew from each cost me $20, and with parts bought online, the project cost was roughly $115, a solid new cardboard box and shipping cost $100. The client provided an Apple IIc and Apple IIGS, both in need of service, in trade for the commission. Whether or not I came out ahead has yet to be seen…

This video shows the unit in action (before screen adjustment and mouse swap) along-side some audio from the original tutorial cassette that shipped with the Mac:

Launched in 1987, the Macintosh SE was the successor to the Macintosh Plus, and the first Mac to ship with a built-in hard drive (depending on how it was configured.) Despite being hampered by the same aging tech specs as the Plus, the SE was the first compact Mac to have an internal expansion slot, which allowed for things like an external monitor or network card.

Purchased for $45 on eBay, this unit was barely-functional, filthy and smelly when it arrived. Following my initial success restoring my own Mac Plus, this was most ambitious restoration — and it ended up being more difficult than I could have imagined. Although it wouldn’t boot, swapping parts with other Macs proved that the logic board was stable. My initial attempt to service the power supply failed, and it was replaced for $35 from eBay. When that proved insufficient to revive the machine, another analog board was purchased for $70. With the guts over 65% replaced, the unit sprang to life and (after cleaning the heads) turned out to have a functioning floppy drive… but a dead hard drive. Fortunately, that was easily replaced on eBay for around $40. An era-appropriate keyboard and mouse and user manual were also found on eBay for about $60 combined, and another $35 was spent to max out the RAM. Total project cost exceeded $280.

Although it was gross when it arrived, the case was intact. After a thorough soak, scrub and strategic baking soda rub, the unit cleaned up fairly well, with only a few light scratches. Attempting to improve the condition using a magic eraser was ill-advised and left some (barely visible) swirlies in the plastic. A multi-day soak in 40v liquid peroxide and hot water in the sun restored the original color consistently.

I ended up selling the unit to a fellow hobbyist for $280 plus $30 shipping to help defray the cost. Given that shipping cost $90, this project was not profitable — but it was instructive. Overall, I found the SE to be a noisy and generally unimpressive machine for the era. If I could find one, I’d much rather have a SE/30.

A video of this unit in action can be viewed here.

First shipped in 1986, the Mac Plus was the third Macintosh ever made (4th if you count the 512k, 5th if you count the Macintosh XL). It came with 1MB of memory on the same 68000 processor as the original Mac, but was expandable to up to 4MB RAM and could support a standard SCSI hard drive via an external connector.

Since this unit was in Apple’s “Platinum” gray color scheme, that means it was shipped in 1987 or later. I acquired the main unit from a volunteer at Syd Bolton’s PC Museum, after Syd passed. It was in decent cosmetic condition, but needed standard refurbishing. I had a platinum extended keyboard in storage since I was in high school, and found a matching mouse on eBay (which looked and worked great, but had a stiff cable.)

The radial capacitors on the analog board were replaced, and the solder points for the flyback transformer were re-flowed, and the RAM was maxed out. I cleaned battery residue from the connectors and installed a new clock battery. The eject gear on the floppy drive had broken and was replaced with a part from Retro Fixes, and the drive was cleaned and lubricated. The entire unit was disassembled and cleaned, then retro-brighted using a mixture of 40v liquid peroxide and hot water in a clear tub left in the sun.

The result was fantastic — possibly the best cosmetic condition I’ve ever seen, with a great color match between components. Everything was fully functional after a total project cost of around $150. The completed project was sold to a collector in Seattle for $190, in May of 2019, and I learned a valuable lesson about the cost of shipping — which greatly exceeded the budgeted $40 to break even.

A video of this unit in action can be seen here: