Smart phones are getting interesting again — and I’m not talking about next week’s Apple event, where they’re sure to announce yet another set of incremental changes to the iPhone, or Samsung getting caught throttling apps on their most recent set of samey Galaxy devices. I’m talking about choice re-emerging. Slowly, mind you, but without the participation of big data gobbling companies. Instead, its brought to you by the same type of nerd that railed against the desktop duopoly in the 90s: the Linux crowd.

While Desktop Linux never really had its day, Linux has succeeded in a myriad of different ways: on embedded devices, web servers, and in tiny computers. It turns out there is a place for an alternate operating system — it maybe just looks a little different than the computers you see at Walmart or Best Buy.

As consumers we’re fairly bereft on hardware choice — except for a few expensive experiments, smart phones all pretty much look the same these days. Software choice, too, is basically non-existent. Do you want to buy into Apple’s ecosystem, or Google’s? If you don’t want either, then you’re basically cut off from the world. No banking, no messaging, and thanks to the 3G shutdown, soon no phone calls either.

Those tackling the issue of hardware choice are a relatively brave few. The FairPhone isn’t 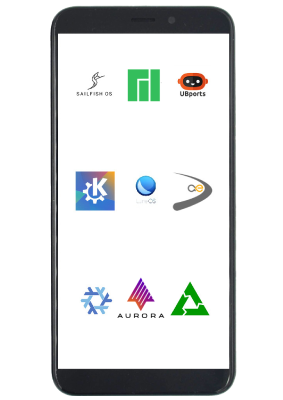 cheap, or terribly different looking, but its a good effort at making a repairable handset. The PinePhone is a truly hacker-friendly device, with hardware switches to protect against snooping software, and an open bootloader capable of handing off to multiple operating systems. Both devices still look like rectangular slabs, but have important features that the hegemony is unwilling to consider.

It’s also interesting to see big manufacturers explore different form factors. I’m glad to see folding phones making a comeback — although they remain too expensive for my blood. There’s nothing approaching the 3G-era of creative and exploratory hardware design, though. When my Veer finally gets cut off from T-Mobile’s doomed 3G network this summer, there is unlikely to be a replacement quite so svelte.

But while its true that hardware remains mostly yawn-worthy, smart phone operating systems are another story. While Windows Phone still has a few hold outs, and there’s a handful of us holding on to webOS, most of the world has accepted either iOS or Android. But Linux is not to be counted out — and this is where things get really interesting.

This summer, I ran Sailfish OS for a couple weeks. Based on open-source Linux, but with some proprietary software, Sailfish is built by a company in Sweden called Jolla, who offers it as a viable alternative platform and has had success in certifying for use in some European governments. The free base OS is quite stable (although I don’t love some of their UI choices) and the paid version provides Microsoft Exchange enterprise email and a Google-free Android compatibility layer. The former is too buggy for serious use, in my opinion, and the latter suffers from some stability issues. But for basic use, on modern hardware, Sailfish is gradually becoming a legitimate contender.

Other Linux-based offerings are at varying levels of maturity. Ubuntu Touch doesn’t quite have the backing it did when initially launched, but it was a breeze to install on my Pixel 3A. Manjaro Linux is fast becoming the OS of choice for the PinePhone crowd — but I can’t afford the hardware, so I haven’t tried it out. And my own favorite, LuneOS, which is an attempt to restore webOS to its original mobile glory, by porting Open WebOS (and other) components, along with a familiar UI and APP support, continues its slow evolution.

Back in the infancy of the smart phone, I considered myself an early adopter. I stood in line for the first iPhone, having sold two of my most precious gadgets (my Newton 2000, and my iPod) to pay for it. While at Microsoft, I had virtually every Windows Phone 7 device available. And I’ve had numerous Android-based devices, and worked for 3 years on an open Android (AOSP) derived platform at Amazon. But the past 7-10 years have been depressingly boring. Watching people drool over the new iPhone that’s basically the same as the last iPhone is infuriating — its like society collectively agreed that we’re not interesting in investing in innovation, only in rewarding repetition.

In early 2022, I can say unequivocally that most people don’t need, and won’t be satisfied with, a Linux-based phone right now. But for the first time in nearly a decade, my desk has an array of interesting smart phones on it again, and I’m optimistic that a couple of these new OSes might evolve to the point where those of us who aren’t willing to trade our privacy for the right to make and receive phone calls might finally have some choices again.