Monday’s headline reads “Ohio surpasses 200,000 Covid-19 cases,” while the story inside reports than 18,235 people have been hospitalized in the State, and that the median age for the infected is 41. We turned 40 this year, so that last fact is hardly comforting. It is comforting that deaths are going down – we are getting better at treating this thing. But the stats don’t really tell the whole story: this is a country where hospitalization can leave a family financially devastated. I had two very minor surgeries this year – the kind of incisions you might inflict on yourself if you accidentally sat on a pocket knife you left open. The combined bill was over $20,000. Fortunately insurance covered all but about $3000 – which we were able to manage through our HSA (Health Savings Account.) But we are hardly the norm – medical insurance remains far from universal, despite the last President’s best efforts to drag the nation into the First World. 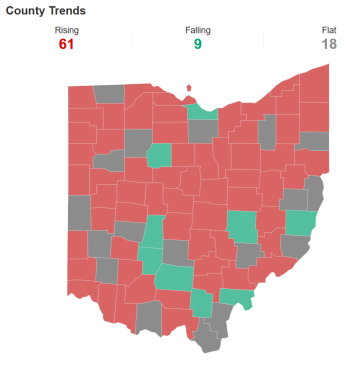 For the two previous weeks, our county had been at the “Orange” risk level – a data-based assessment from the governor’s office, in cooperation with the State’s health department. According to the school district’s health and safety plan, this should have led to a switch to hybrid schooling – reducing the number of kids in the classroom by alternating in-person days. Instead, the county health office agreed with the school board to make no changes. On Thursday, the risk level was changed to “Red” – which, according to the same plan, should have indicated a move to fully online schooling. On the same day, the high school emailed parents about a potential (later confirmed) case, and a teacher was identified in a nearby school with a confirmed case. Two more confirmed cases followed on each subsequent day. In response, the school district held a public meeting where they explained that not only were they not going to move online schooling, they weren’t even going to implement hybrid mode; there would be no change in response to the obvious risk of infection. As explanation, they proffered that having children at home could lead to child abuse, and that kids were better off at school even with the virus. Besides that, they justified, only one family had pulled their kids out of school, so obviously no one is worried about Covid-19 anymore – why should the school district be any different?

We’re that one family. We’re the lone, crazy isolationists, crying “won’t someone please think of the children?!”
And so it goes in small-town, Trump-voting America. Reality doesn’t matter any more – individual rights are more important than your neighbor, the downtrodden, your community, or the world in which you live.

So here we are, preparing for a long winter. The odds seem evenly split over who wins this hotly contested election, but one thing is certain: the loser will not go quietly. We are unlikely to see a clear verdict on election night, and it seems increasingly likely that any ambiguity in outcome will lead to acrimony in the streets, and in the courts. A trip into our town is a journey through a forest of giant Trump signs – good people, convinced that a horrible man will have a better second term than his devastating first. Good people, so incapable of putting others before themselves that our government – alone among the G8 nations – has declared that it cannot control the pandemic (but has somehow claimed victory anyway.)

We bought a chest freezer, and we’re stocking up on food. We pulled our kids out of school, and Nic has, once again, re-arranged her life around their online class schedules. We’ve started tucking away emergency supplies, like we did in March when this thing first hit. We had a few months of relative normalcy this summer, when activities were outdoors and the risk was lower, but the data already indicates that things are getting worse again – only this time, no one cares. Between pandemic fatigue, and people believing the whole thing is just a left-wing conspiracy anyway, all but us crazy folks are just going to pretend it doesn’t exist any more.

There’s a lot to be said about how the media spins a message to support one viewpoint or another: I’ve got no patience for the Left’s attacks on Amy Coney Barrett’s faith or humanity: you can disagree with her, you can certainly disagree with the rushed, hypocritical process by which her nomination was pushed through, but her judicial record and her personal life are admirable, and she doesn’t deserve the vitriol spat in her direction all month. And if I hear one more Fox News talking point about how Biden is an agent of the radical left that is going to destroy America – while the sitting President flails incompetently, accompanied by their cheers – I’m pretty sure I’ll just vomit on the spot. But it’s the ability to totally disregard inarguable data in favor of a clearly biased interpretation of events so that they align with one of two twisted ideologies that really boggles the mind.

Our plans for the holidays are now very modest – and very tentative. We can’t visit family in Canada, because Canadians know better than to open their borders. In-country air travel is statistically very safe, so if we can, we’ll visit friends in a less insane State for a big event in their lives. And we’ve jettisoned plans to go somewhere warm, because all the warm States are even crazier than ours. Instead, we hope to enjoy a couple secluded get-aways closer to home. We don’t know what the election will bring – and there’s a significant chance our long-term immigration status will be impacted by the outcome – but we do know that God is in control… even though the country that claims He is a part of it has completely forgotten how He told us to behave…

2 thoughts on “Winter is Coming”