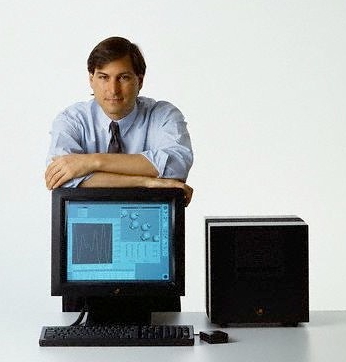 Steve Jobs followed up the Macintosh by getting forced out of his own company. In response, he started NeXT — and took some top talent from Apple with him. The new company created a 1 foot, solid black cube, then loaded it with a Unix-derived Mach microkernel, aiming the whole thing at the “Workstation” market. Exactly what that market was became an issue for the company, but they did have some important customers: John Carmack created Doom on a NeXT computer, and Sir Tim Berners-Lee created the World Wide Web on his Cube.

Despite its unwieldy size and disappointing performance, NeXT cubes remain a sought-after collectors item — one recently sold on eBay for over $3000. I was lucky enough to get my hands on the follow-up machine, called the NeXTstation (or pizza box) for a fraction of that price. Of course, it didn’t work, but that’s never deterred me before. While it started its life at the University of Pittsburgh, it had spent its retirement years in storage. I met the seller halfway to Pittsburgh for the hand-off, brought it home, and fired it up to a diagonal line pattern, reminiscent of the “checkerboard” display on a dead classic Macintosh.

After all the normal maintenance tasks, like cleaning the logic board, and re-seating the RAM and anything else removable, the first order of business was to isolate the problem — was it the monitor or the computer generating the image? Unfortunately, without parts to swap, this was hard to do. The NeXT is a complete system: the monitor gets its power from the computer, the keyboard connects to the monitor, and a key on the keyboard tells the whole thing to turn on; there’s no power switch, and no easy way to fire up the system without the monitor. I ended up looking-up the pin out for a VGA cable, then splitting out the specific pins for the video signal (the NeXTstation is monochrome, but all my VGA monitors are color, so I ran the video signal to green) to another display, routing the rest back to the original monitor for power and keyboard. This hack allowed me to get an image on a known-good monitor, verifying the issue was with the computer, not the display.

Impressively, but unfortunately, the design of the pizza box is quite sophisticated: there are very few independent parts, and short of re-capping and re-chipping the whole logic board (the latter probably near impossible) there was really no repair that could be done. Fortunately, Black Hole, Inc had new-old-stock logic boards available, and sold me one for a reasonable price. Once installed, the NeXT sprang back to life — and demanded a password I didn’t have. The owner at Black Hole has all the old documentation online, so I was able to hack my way in, reset the password, and configure basic networking. I was amazed that the Quantum Fireball hard drive was still spinning — but didn’t realistically expect it to last long, plus it had no space for an OS upgrade. The machine came with NextStep 2.2, but I wanted to get to at least 3.3. A SCSI2SD was in order… getting it working was another ordeal.

Instructions in the forums provided the necessary information for configuring the SCSI2SD, and after some fidgeting, it was recognized by the machine. Black Hole sold me a SCSI DVD-ROM, and I burned an ISO of NextStep 3.3 using a more modern computer. To connect it to the system, I used an old hard drive enclosure for a Mac, and a SCSI 2 to Centronics cable. I also had to raw-write a boot floppy image. The floppy booted, handed off to CD, which formatted the SCSI2SD without complaint, then wrote the NS3.3 bits to the SD Card. Everything looked good until I tried to boot from SCSI2SD — the system would just hang. After repeating these steps, with minor variations, and messing with SCSI termination, I finally just pulled the SD card out, plugged it into a modern Mac, and with some help from this blog post, used DD to write a pre-made NS3.3 image to the card. Once re-installed in the NeXTstation, everything worked perfectly. I needed a mounting bracket to make the SCSI2SD sit securely in the case — but fortunately another hobbyist had published one that was a fairly quick 3D print away.

The final step was to pull anything valuable off the old hard drive. For that, I rigged up a FTP server on my G4 Cube, and command line “put” things from the old, then “get” over to the new. The machine came with Mathematica 2.2, which I badly wanted to play with, but the license was invalid, and Wolfram was unable to help with a replacement key. I worked around by extracting a copy of Mathematica 1 from a NextStep 1.0 disk image I found online.

Copying stuff back and forth via FTP got to be a pain, so I setup a NFS share on my Raspberry Pi, and got the NeXTstation on the network properly. I even managed to connect to a network printer. I also rigged up a companion Virtual Machine, running OpenStep 4.2 on a modern computer that functions as sort of a bridge and place to experiment with new ideas. I really, really like this operating system, and the portability between hardware platforms that became so useful for its future.

Although NeXT failed as a company, they were acquired by Apple in the late 90s — providing an infusion of needed tech, and a way to get Steve Jobs back in the captain’s chair. After a few false starts, NeXTStep (aka OpenStep) became the core of Apple’s OS X, and in turn, the core of iOS, iPadOS, and tvOS. All of Apple’s successful products for the past 20 years trace their lineage to this black slab, and its quirky but powerful operating system. For these, and other reasons, the NeXTstation likely has a permanent home in my collection.

Software and bits I collected during the restoration can be found in our Public OneDrive share.