The Internet is in crisis. Famously called “The Four” by marketing author and professor Scott Galloway, the companies that have become the pillars of our world wide web are all showing signs of cracking around the edges:

The cyberpunk utopia that the tech-literate hippies of yesterday dreamt up is gone: with the surfaces most people see commercialized to sell crap to the lowest common denominator Internet-using persona, while the rest of the web becomes the seedy under-belly of a filthy red-light district where criminals and sex-traffickers lurk.

Much of the blame lies with the users, of course. 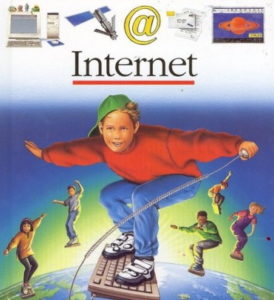 The first at fault were those who flocked to the web with the intent only to consume. Entrepreneurial start-ups looking to leverage the next technology wave found a vote-with-their-wallet force that practically demanded to be exploited. The people who chose to use the Internet, without understanding it, were doomed to be used by it. Clicking blindly on every link, without understanding how that link was formed or how the content it retrieved was served up, made it only too easy for predators to trap their first prey. It may be victim-blaming, but let’s face it, there were a lot of willing victims eager to trade their banking information for gold from a Nigerian prince.
This group spawned the next generation of sheep, those who viewed their computer, and later their smart phone, as an appliance. These assumed its accessibility meant it was safe to use, like a microwave, not a potentially dangerous tool like a gun. So they loaded it up, pointed it at their face, and then acted surprised when it went off, filling their homes with garbage, and spilling their personal information on the ground for others to grind into by-product meal for trade and barter. Assuming a level of literacy-through-familiarity, this generation actually understands even less than the AOL users of yesterday. Back when you couldn’t get online without knowing at least the basic modem init commands, the competence bar was set to a level that insured at least a little comprehension. Now you can send nudes to your boyfriend in seconds without any awareness of the potential consequences.

The next wave of online stupidity is coming soon, and who is going to protect us? The ones that made us victims in the first place.

Google — the same company that leaked the (sometimes coerced) personal information of half a million users of their dormant social network, then hid it from us all — has declared war on Internet standards. In the past months, they have:

And the increasingly incompetent population of the Internet accepts these things, because like sheep, we’re frightened, and desperately want someone to save us from ourselves. We see no choice but to be fenced into a smaller and smaller enclosure, without realizing that not only are we not producers, we aren’t even customers any more. We have become the product.

If the Internet is a loaded gun, and its pointed in all of our faces, and we gave it to someone else and assumed they wouldn’t use it to mug us, then its sort of our own fault. We should have realized the power of the tool we had, we should have learned to use it properly, we should have put it safely away when it wasn’t appropriate to wave it around, and if we needed it to hunt for a meal, we should have had respect for that hunt, and the product it produced.

If a web browser is a speeding car on an information highway, and we set the cruise to 100, climbed in the backseat, and started Instagramming pictures of the scenery, while we let a criminal drive and gave him our wallet, then are they really to blame when we end up in a car wreck after our identity has been stolen? Or do we have some culpability for not paying attention in Driver’s Ed, learning the rules of the road, and being careful about who we invite on a roadtrip?

Once, if you wanted to have a popular service online, you had to provide an open programming interface (an API), that allowed technical users to connect to, interact with, and observe what your service was doing. One-by-one these APIs are being closed off, making services a black-box. The thing is, you’d have to be technically savvy to understand the implications of cutting off the openness of the web — the dishonesty of hiding your intent behind a closed-API.

There’s pieces of this Internet left that still look like it was meant to be. There are still some sites where you can “view:source” and learn what’s really going on in the page. Most sites still have a (usually hidden) RSS link where you can get the content without being assaulted by the ads. Take advantage of what remains of our freedom: use a search engine other than Google, rotate your browsers so one vendor doesn’t get all your history, and beware of articles that you agree (or disagree!) with too much — you’ve probably already been targeted. While Instagram and Facebook make it easy to share with your friends, email still works, and WordPress is still free — don’t put all your eggs in one basket, then let someone else sell the basket. Services you build yourself, or pay for, are less likely to exploit you.

Here’s something I never thought I’d say: don’t buy an Apple product any more. Or if you do, don’t buy one made after Steve Jobs died — they’re cheaper anyway. Maybe he wasn’t the nicest guy in the world, but he had the right influences, and figured out how to find a balance. If you want a nice piece of kit, turns out Microsoft, the big baddy of the 90s, had a change of heart (or at least, leadership) a couple years ago, and have put their culture back the way it should have always been – then started making some really nice hardware.

And for sense of community, pick a topic that interests you and find a non-Facebook (and non-Twitter) forum for it. There’s lots of kinds of geeks on the Internet, and while the UI on most forum sites may not be as polished, the conversation, depth and comradery is much better in a specific community than in a big-block-store-where-you-are-the-block. Even if that means the site doesn’t have an HTTPS certificate, or an AMP-optimized SEO — just don’t give out your home address, post any boudoir pictures, or accept money sent via Western Union.

My latest trick — and I’m finding it quite freeing — is to leave my phone behind, or use an alternate communication device (a “dumb phone“) that doesn’t track my location all the time. Most phone calls from unknown numbers are scams anyway, and most communication doesn’t actually need to be instant.

I’m not alone in mourning the death of the dream. Tim Berners-Lee, the inventor of the world wide web, is ready to re-invent it. Politicians now understand that its been weaponized against us. Even Harvard Law is writing about how the echo chamber is destroying nuance and discourse. This was supposed to be a global community of ideas, information, exploration and collaboration, where trolls were labelled as such, and spam recognized and laughed at. Instead, the users of the platform became increasingly simple, while our predators become ever more sophisticated.

When John Perry Barlow (yes, that one) posted the Declaration of the Independence of Cyberspace, he thought the enemy of that realm would be the government. He was wrong. We are the destroyers of cyberspace — we, and those we willingly became victims to. While he borrowed the phrase “Governments derive their just powers from the consent of the governed” he could just as easily as written “Google derives its power from the consent of its users.” Stop consenting so much.