The drive should have taken about 5.5 hours, but since I forgotten that my GPS app was in “avoid tolls” mode, it took closer to 7. (Incidentally, little known tip: the “Here Maps” app, originally from Nokia, allows you to download detailed, turn-by-turn full country maps for offline use, so you can navigate with your phone without paying data roaming charges.) We got to Kandern late in the day on Monday, approaching from the north, and stopping immediately at the grocery store at the edge of town to buy German chocolate. Then we crossed the street to my old house, Herman Burte Strasse 1a — which looked exactly as I remembered it. 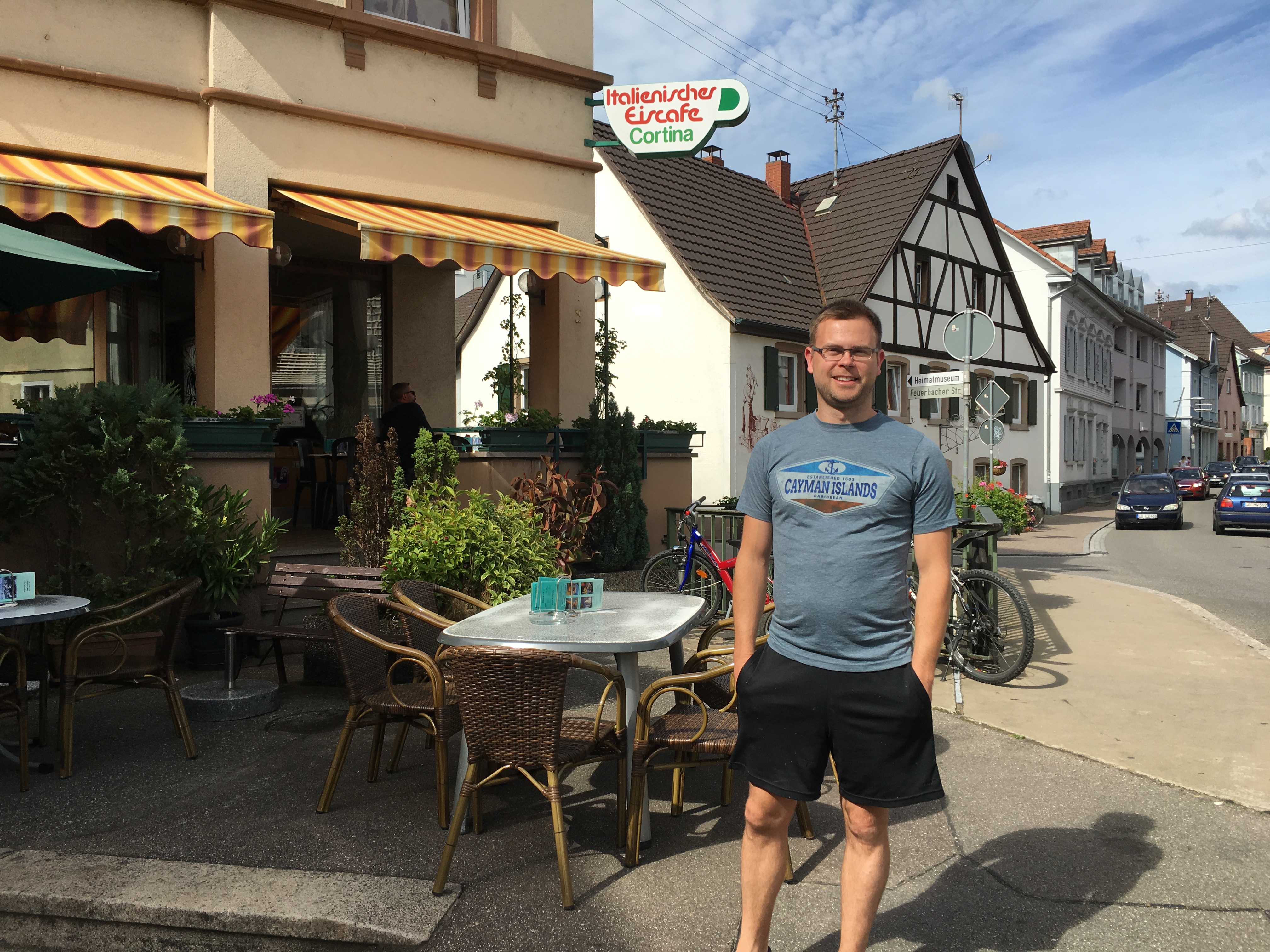 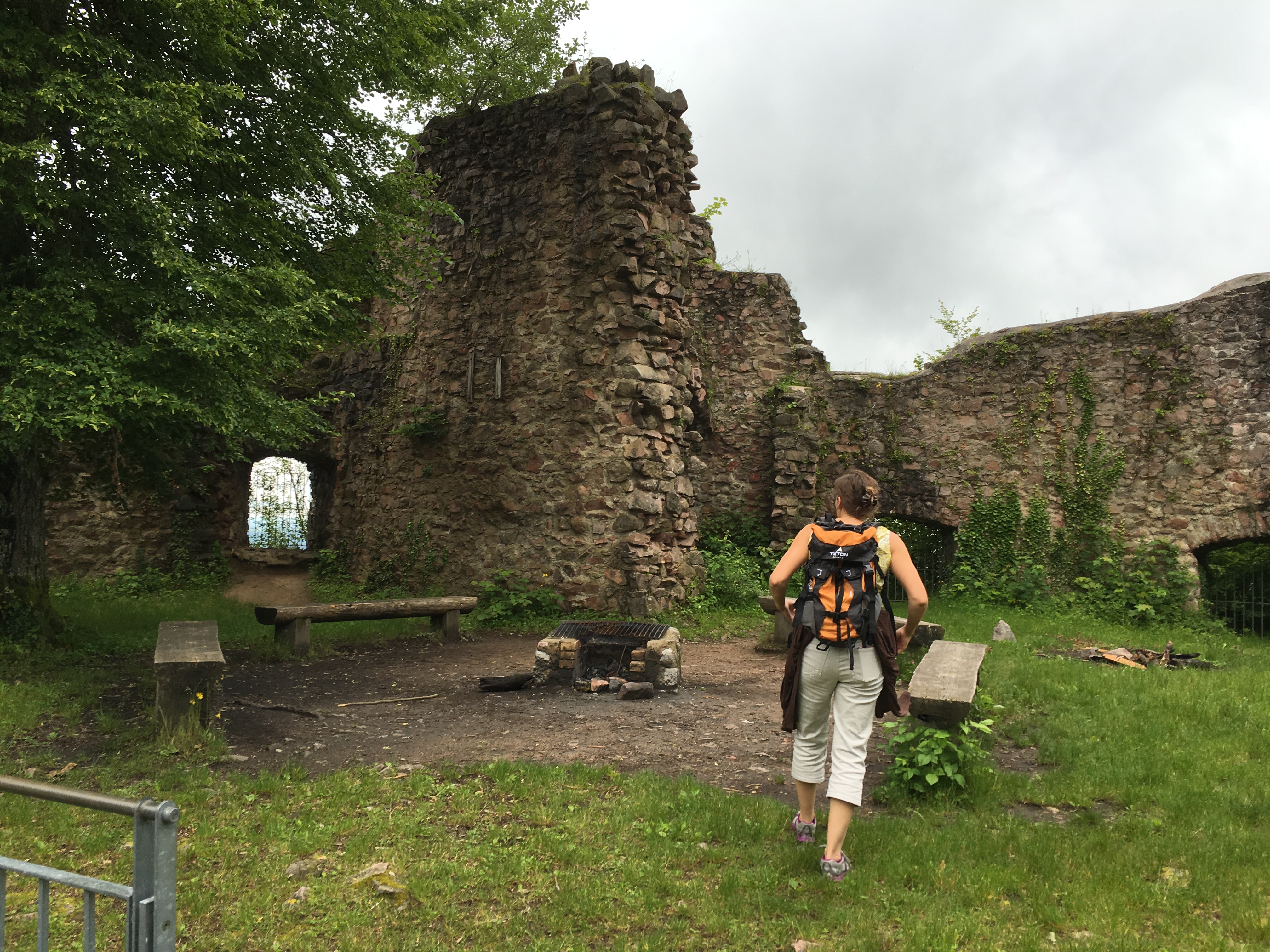 As we walked through town, some changes became evident, which impacted my planned tour for Nicole (which consisted largely of food stops!) The Turkish owned pub that made the unparalleled pommes frites was now apparently under Scottish ownership, and did not have fries; the hundred-year old bakery that sold amazing little brotchen was now a woman’s fashion store; the toy store in town where we wanted to souvenir shop for the kids was gone. But the Eis Cafe remained, and we had gelato and later “spaghetti ice.” My old school was right where I left it, although bigger now that the long-planned addition was complete.
Some changes were good. When we lived there, a small group of refugees lived in a building across the street from the school. Despite being a school full of missionaries and missionary kids, at the time, there was apparently no ministry to those refugees, and we’d look awkwardly across the road at each other, neither group quite belonging but despite our shared displacement, having no involvement with each other. It turns out the Turkish pub moved to a proper restaurant on the other end of town, and while we were ordering up our pommes and shawarma, we heard English being spoken by other guests, and struck up a conversation — assuming they were associated with the school. In fact, they were part of a group of believers now ministering full time to the refugees. Germany has committed to housing a million refugees from the most recent crisis, and the region around Kandern had signed up to receive 40,000 of them. New temporary housing was built on the edge of town, and the school has donated some of their dorm houses surrounding the town to the effort.
Its easy to think of the German people as being somewhat cold. I warned Nicole that we would have to communicate in German (another language I used to have some command over, but is now quite rusty) — but not for long: most Germans in town actually speak some English, but will rarely use it until you first make an attempt to speak their language. Though they may seem somewhat brusque at first, the people of this little region have long hosted the annual plague-like arrival of hundreds foreign missionary kids, and then signed up to house 40,000 refugees.
In fact, the town without the missionary kids felt a little like a movie set without the actors: dream-like and empty. With school out its just a typical little German town — that happens to be nestled on the edge of the Black Forest. Nicole and I drove up to Hochblauen, although it was too foggy to see anything, and hiked to the ruined Sausenberg Castle, where the view was considerably better. Our little Gasthaus in Schlingen was adorable, and afforded us some nice evenings quietly sipping wine and catching up on our reading. We even got in a swim at Schwimmbad before leaving town on Wednesday.
From there we wound our way to Zurich, getting a quick look around, before heading up a mountain to try to find the train to a look-out above the city. We found the train, with a great view of the Alps, but then went the wrong way, and saw some different parts of the city than we had planned! We flew out the next day, managing a few more meals based on French bread, and paying a small ransom to return the rental car in a location different from where we’d picked it up!
It was a near perfect trip, for the limited amount of time we had. We do intend to bring the kids to Europe some day — but when they’re older and can appreciate it more. For just the two of us, it was quite affordable… with 5, not so much. There’s lots more of Europe we’d like to see, but it’ll have to wait for the next trip. Hopefully that’ll be in less than 19 years!