We really don’t want to become that couple who doesn’t remember how to talk about anything but our baby… It’s just that he’s soo cute and awesome, that’s it’s hard to refrain. Benjamin sleeps like a rock, rarely wakes us up more than once a night crying (although we have to wake him up to eat at this point), and let’s us go out in the evening without putting up a fuss. He loves his daddy, and when he’s upset, Nic just hands him to me and he calms down. He’s still adjusting to diaper changes — he really doesn’t like being cold — but otherwise he’s a dream baby.
He had his first doctor’s appointment today. It went very well, and he’s regained his birth weight, which means he’s eating and digesting properly. He still has a little bit of jaundice, so we have to try to find him some sunlight, but otherwise he’s the picture of health. And speaking of pictures… 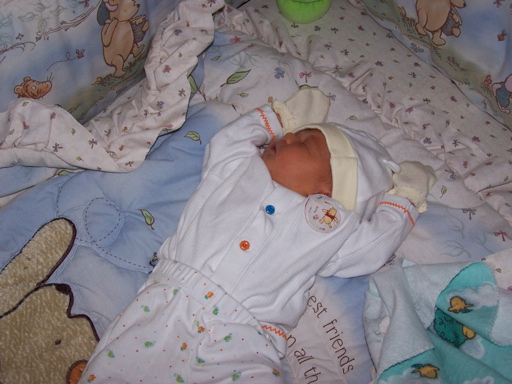 Benjamin likes to sleep with his hands above his head.

Tummy time, he’s not so sure about, but he definitely is getting strong!