One of the president’s more ridiculous statements in February — one that looked even stupider a few weeks later as we began locking down — has become something of a self-fulfilling prophesy. Not, of course, because we’ve beat the coronavirus, but because as a nation we decided it wasn’t a thing any more. Unable to follow the pattern of other countries that have done a good job of managing the pandemic, Americans quickly decided the bigger threat was to their individual rights, and that anyone with the education or authority (elected or otherwise) to give them guidance during a pandemic was actually the enemy.

In the battle to protect their rights, the collateral damage comes in the form of over 100,000 of their neighbors who died as a direct, or indirect, result of the dangerous spread of Covid-19. So be it, we’ve decided: I’ll do what’s right for me, that’s what being an American means!

I have a whole other draft post of some of the astoundingly ridiculous parts of being in America right now, but I’ve decided those won’t help. While the country that voted for the border wall guy is effectively locked out of visiting most other countries (including our home country that has no interest in seeing more Americans right now) life actually does go on. And the reality we’re in is one we just have to live with. The US is uninterested in participating in global efforts to manage the virus, because no one tells Americans what to do — not other Americans, and especially not the World Health Organization. And so we have to figure out how to live with this virus as a daily reality. A reality that will continue at least until we have a vaccine, but maybe longer, since we don’t trust vaccines either…

Of course, opinions on the actual risk fall fairly precisely on political lines. And since its an election year, all data made available to us is filtered through one of two lenses. If you’re on the left, the pandemic must be the worst thing that ever happened because Trump’s mismanagement of it should impact his re-election chances. If you’re on the right, the pandemic has to be overblown, because if it really was a problem, obviously Trump would be doing a better job. Now, go ahead and apply this logic to everything else going on: 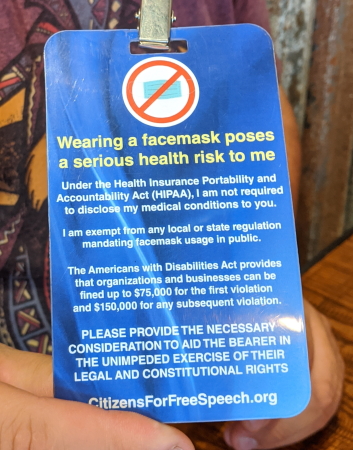 If you’re on the left, the peaceful protests against systemic racism only turn violent when jack-booted storm troopers appear and start shooting gentle hippies that were singing Kumbaya before they got attacked.
If you’re on the right, Antifa terrorists were burning American cities to the ground before Trump’s heroic defenders of Christian values arrived to save the day.

But what if I told you that you could be anti-racist, without looting local businesses? Or that you could support your local police department, but still want bad cops to go to jail?
What if I told you that practicing basic precautions like wearing a mask, or being thoughtful about interactions with those around you that might be more vulnerable, would allow your society to resume with a reasonable degree of normalcy?

Well, I could tell you those things… but since they don’t align with one of the two available political positions, you probably wouldn’t listen. It is an election year, after all, and any information that doesn’t affirm your worldview is irrelevant. You can hardly blame Americans — its hard to remember a time where politicians didn’t use fear of the “other” to win elections.

It turns out, in talking to individuals from both sides of the Covid debate (because somehow reality is up for debate), one thing we can all agree on is that we’re not getting good information. I’ve been tracking stats for our county, and the neighboring, more populous county, all summer. The raw data is extremely limited — and all other information comes with a political spin. The CDC has failed — not because its not a rigorous scientific organization, but because it doesn’t know how to disseminate information to the American public. Opinion wins hearts because that’s all we’re offered on the news. Most people I’ve talked to, regardless of political viewpoint, are actually hungry for good data, and willing to talk reasonably about what little we have.

I find neither the leftist fear-based view of the pandemic, nor the right’s determination to pretend it isn’t real, to be satisfying. I’d much rather take a data-driven approach to evaluating risk — for myself, my family and my neighbors. And actually, most people I talk to individually are similarly reasonable. Its just that the political discourse in this country drives groups to extremes…

Here’s what I’m fairly confident in for our family, given the data we’ve collected recently:

First, it is possible to get home to Canada. Nic and the kids spent a little under three weeks there, and although it was challenging, there isn’t an actual border wall — just an abundance of caution. Canada requires two-full weeks of complete isolation for anyone entering the country, but allows travel for essential purposes — which includes “reuniting with family”. Because they would be staying in a camper on Nic’s parent’s property, and complete isolation would be challenging, we all self-isolated at home in the States for a week prior to their trip. We then planned a route home with emergency bathroom spots identified where they wouldn’t encounter other people (trails, parks and cemeteries with lots of trees). Fortunately the stops weren’t needed. The border crossing was facilitated by an App-based form they filled out before they left home, that identified where they would be isolating, how they would get groceries, and what numbers they could be contacted at by the government to confirm their conformity to the plan. The camper was spacious and modern, and they had access to the pool and the Internet during their quarantine.
I remained in the US as the “anchor” — and because we couldn’t risk being refused re-entry to the States and losing my job. On the way back they were “reuniting” with me, and had no issues.

Second, we live in a county where the risk is low. Although compliance with the mask mandate probably hovers around 50% (we have lots of those “don’t tread on me” Americans near us), the population is not dense, and there are few large gathering areas. Since data was made available in March, only 0.7% of the county has been impacted, and less than 50 people have died with Covid. Add to that the new information we’ve just gotten about co-morbidity (and factor in common co-morbidities, like obesity) and its less than 0.05% of our population that has died from this since it arrived. I update my spreadsheet daily, and its been 15 days since I had to update the “deaths” column — I’m sad when I do have to change that value, and I pray for those families, but the data-based reality is that 46 deaths since March is not much.

That said, the next county over, which includes the city of Cleveland, has very different numbers. 4% of their (much larger) population has been impacted, there are about 140 news cases a day on average, and they’ve only recently started to get that under control. What this means to me, as someone who spends a lot of time trying to interpret data in my day job, is that risk varies — and therefore, so should precautions. We will, of course, practice reasonable precaution any time we’re outside our home. But we will increase those precautions if we have to go into the city. And for every destination between picking up groceries at the corner store and going to the city, there’s an appropriate scale of precaution that should be applied.

Unfortunately, with a polarized, politicized view of the pandemic, there’s little room for this sort of risk-based evaluation. Either you believe you have the right to sneeze in anyone’s face that you want, or you believe that people shouldn’t leave their home. And the truly unfortunate thing is that this has begun to split the Church. God’s people, who should be united in showing mercy, practicing justice, and walking with humility — those of us who are called to love self-sacrificially — are fighting about our rights and our fears.

I am much more concerned about the ability of the church to function lovingly in the world as a beacon of hope, than I am about seeing mega-church pastors fight for their rights to put 3000 people in a room. I am much more concerned with seeing God’s people united in the Great Commission, than I am about exactly how each congregation decides to apply the Biblical mandate to gather (which should be determined based on risk factors, as outlined above.) And while I’m happy that my kids can participate in hybrid schooling and outdoor youth group right now, I recognize that just one county over, things are different — and its not a political spin that should be dictating our reaction to events in the world; it should be Christ’s love, and where available, good data.

He has shown you, O mortal, what is good.
And what does the Lord require of you?
To act justly and to love mercy
and to walk humbly with your God.
– Micah 6:8

To act justly means that Black lives definitely matter, but that neither violence nor Marxism will fix the problems that need to be addressed.

To love mercy means that I should wear a mask: it is an act of mercy to others who may be at risk.

And to walk humbly with my God, means that my rights aren’t important — a servant heart, and a love for God and others, should rule my life. (It also means a recognition that my political candidate/party of choice might not actually speak for God…)

2 thoughts on “One day, it’s like a miracle, it will disappear”