The summer of Shelby is almost here. For the past 18 months Shelby has been coming together. It feels like a long time, but when you consider that this is a 1.0 product that wasn’t even imagined two years ago, and was only a crude prototype 6 months after that, its amazing how fast things have moved.
I’m in Germany this week, at Hannover Messe, the largest industry event of the year, where no less than 4 Shelby pre-release units are on the show floor, scattered among partner booths. Thanks to one of those partners, we even got a pretty cool video to show off with. We’re not quite done yet, but we’re getting close and its pretty exciting to see people’s reactions.
Shelby is something new in this space. It allows industrial automation users to bring

expectations from consumer products to their jobs. The equipment my company makes is built to last for decades — literally, 30 year old products are still running in manufacturing operations. But with all the focus on durability and reliability, there’s not much room for usability. Shelby, maybe for the first time, bends to meet the user’s needs, rather than the other way around. Its not perfect, and it has a lot of bending yet to do. But it delivers something to every customer within about 5 minutes of set-up, and it does it in a way that puts a smile on people’s faces.
But that’s not the thing I’m most proud of — Shelby is something new for its developers too. Shelby has personality, because the people who made it put some of themselves into it. This was not a top-down, Functional Specification driven product development cycle. This was a personal, iterative, lean project, designed by engineers, interface designers, and a product owner who spent his evenings writing code.
Someone once asked me “If there isn’t a requirements document, how will engineering know what to build?” Isn’t that a bizarre approach to inventing something new? Yet, that’s the norm: someone in marketing writes a requirements doc, throws it over the wall to engineering, who code what they think they’ve been asked for, throw that over the wall to QA, who test how they think its supposed to work, then someone in marketing tries to go sell the thing that’s been squeezed out of a machine like sausage. For most of that cycle, the customer is an abstract concept that the majority of the people in the process will never know, and the output is usually quite different than the person in marketing thought they had spec’ed out.
Our team is different: I’m “product management”, but I sit next to engineering and design, and “QA” is a developer on the team charged with ensuring tests can be automated and quality can be tracked through daily execution. We all sit together physically, and collaborate continuously. We’re constantly sharing what we’re doing with customers (maybe just a little bit too constantly!) who steer the direction of the development iteratively. Work is done in two week sprints that are discussed not more than two or three weeks in advance, so that we can constantly adapt to new information, better ideas, and input from the customer or the business. The approach is called “Lean Agile” and while we’re not the first development team to implement it, we’re among the early adopters in industrial automation.
To then take this very personal thing, which embodies the creativity and skill of every part of our (slightly too small) team, and deliver it to a marketing machine to be included in boilerplate messaging, with a name we didn’t get to choose (the actual name is 5 words that describe the product, but capture no one’s imagination) is more than a little frustrating. But even despite the efforts to normalize it, this thing has too much personality, and it explodes out of the box, with a cute logo and our code name getting used by customers when they ask when they can buy it, and partners making videos showing it off.
And suddenly, and finally, it has a life of its own, and it doesn’t matter that it was an uphill battle to get here, or that we had to fight the normal process, explaining over-and-over again why we were breaking so many rules or why doing something differently didn’t mean you were doing it wrong. Suddenly none of that matters, because people love it — and I don’t have to evangelize any more, because everyone wants to talk about it. 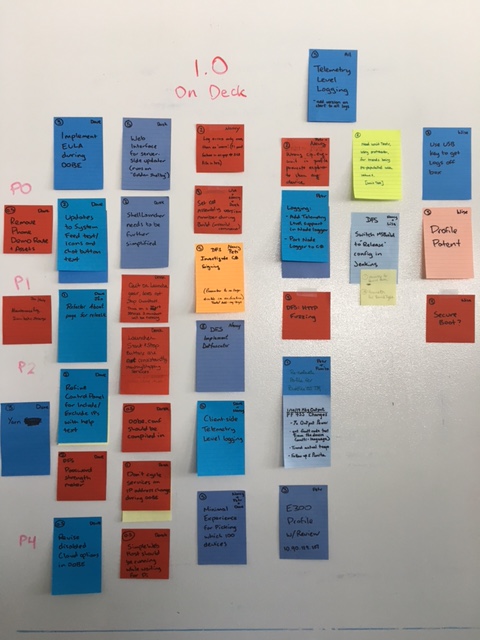 There’s work left to do before we ship our 1.0 product. Sometimes I’m not sure how we’re going to get it all done. And 1.0 is not the end of the journey — its literally the beginning. There’s a roadmap a mile long of things we wish we could have gotten done, and a vision that goes even further. But this way of doing things works: its bigger than marketing, bigger than product management, and bigger than me, because there’s a team of people who own it, and care about it, and want to make it better by listening to customers and doing the best work they can within our constraints.
This one took everything I know, and everything I’ve learned up to this point — and that wasn’t nearly enough. It needed a team of people who brought what they knew, and were willing to pour that into a little gray box that lets industrial automation customers feel like someone actually cares about making their jobs easier. It may not be a product that changes the world, but its a product that I’m awful proud of.