Today, Benjamin turned 6 years old. We’ve been parent’s for 6 years!
For Ben’s birthday today, he’s enjoying his first grounding. No lego and no electronics for two days — that thanks to a new Christmas break habit of delayed obedience. Yesterday, he paused his video game when called for supper, then decided he’d go build something with lego before he came downstairs. He ambled down the stairs 5 minutes later and straight into being grounded for the first time ever!
We’ll celebrate the day tomorrow with another first — he and I will finally get to watch Star Wars together! Another little friend and his dad will come over, and the girls will go hang out elsewhere, so we can have the volume loud and not have to share the popcorn. We’ll be watching the original, unedited movie “A New Hope” on widescreen LaserDisc, so he can appreciate its original form. He’ll also be getting some classic Star Wars toys to play with. I’m at least as excited as he is! 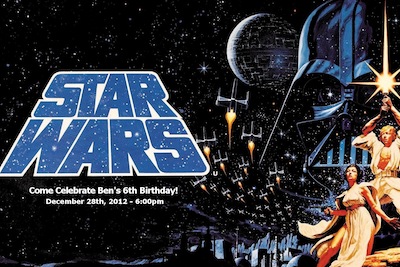 Happy Birthday, little man. We sure do love you!