Update 2020: If you want to skip all this, I have a pre-made OpenStep 4.2 Virtual Appliance (OVA) for Oracle VirtualBox that is ready-to-use with apps, games and pre-configured networking. Download it here.

I’ve been hankering to learn more about the origins of OS X, so I figured the best place to start would be the OS at its core — NextStep (later named OpenStep.)

When Steve Jobs was ousted from Apple, he set out to create a new company that would deliver elite hardware, and a revolutionary operating system. NeXT was started to build powerful hardware and software that would leapfrog the Mac (and everyone else on the market.) They eventually had to kill off the hardware line (after making some very nice, uber-high-end machines) but the software they made changed the industry. It was on a NextStation computer, using the NextStep OS that Tim Berners Lee would invent the World Wide Web, and its the true Object Oriented approach of the OS that many companies have imitated or borrowed.

By the mid-90s Apple was in truly rough shape. Their archaic OS, once the greatest thing on the market, was showing its age, and Apple had tried, and failed (mostly due to mismanagement) to replace it. It was determined that they should buy an existing next-gen OS, and re-build on top of it. After flirting with IBM and BeOS, Apple settled on a deal with NeXT — a deal that grew until Apple acquired the company, re-acquiring Steve Jobs in the process. He became the iCEO (interim CEO) and the de-facto leader of the company. Existing ideas were rapidly brought over from the Mac onto NextStep/OpenStep, layered on top of its rock-solid BSD Mach microkernel, Object Oriented underpinnings, and a re-vamped version of its graphics layer, was a new Interface, and a Classic emulator to allow old Mac apps to run.

The end product, after many variations, pre-releases, betas, and one or two fairly ugly general releases, was what we know today as Mac OS X. Much of NextStep is still intact, including low-level OS APIs, visual and development concepts, and culture.

If you’re interested in getting NextStep up and running in VMWare (I’m using a Windows Vista 64-Bit Host OS, but these steps should work with most versions of VMWare — including Fusion) you’ll need to find an ISO of the NextStep OS somewhere, and maybe these steps will help you…

Configuring VMWare
After much frustration, I finally got past the initial hurdle of configuring it so the installer would run off a CD image. Here’s what I had to do:

Get the NextStep 3.3 floppy disc images from this great resource site, nextstepcomputers.org. It has pretty much everything you need, plus some forums that you may or may not find helpful. You’re going to need at least:

Pretty soon you’ll be up and running inside NeXTStep! Check your e-mail — there’s a note there from our old friend Steve!

I have had some mouse problems — it behaves erratically, so I’ll be searching the forums for fixes on that. I found that if I hit “Ctrl + Alt” to release the mouse, then click inside NeXTStep again to send control back to the Guest OS, that clears up the problem… for a bit. Obviously I’ll be working on display and network drivers, but that’s outside of the scope of this article. It’s alive, and that’s all we were after today. 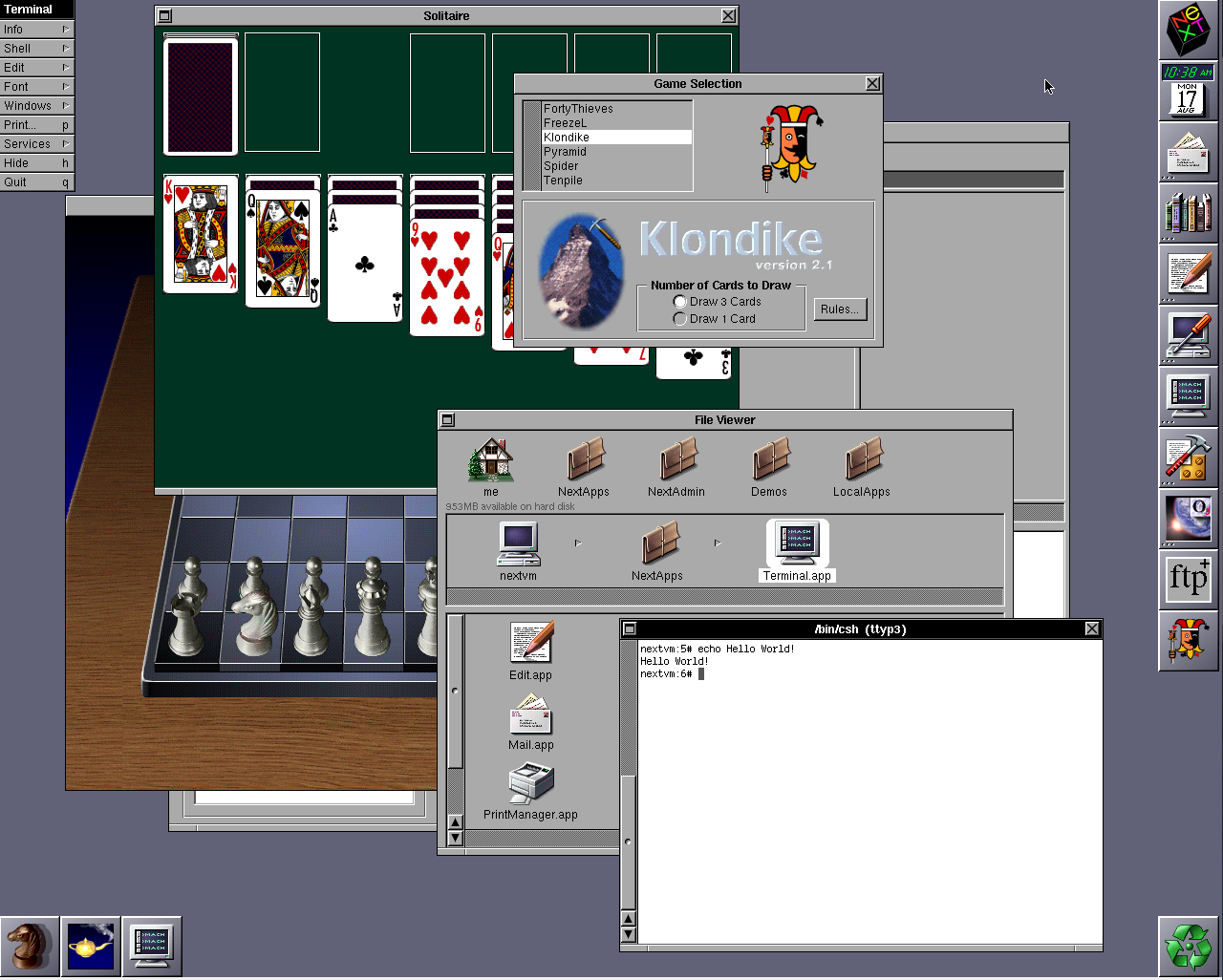 From here I’m going to point you to a couple links that should help you finish up a good install. I’ve also made a drivers ISO that will simplify things greatly.

Enjoy your bit of Apple/technology nostalgia…