I have a friend, let’s call him Adam, since that’s his name, who enjoys a good debate. I am convinced that he so much enjoys a good debate that’ll he often take a losing, or even a preposterous side, just to incite argument. But that’s OK, because I enjoy a good debate myself, and have been known to, occasionally, pick a contentious position, just because the mental work-out entertains me. 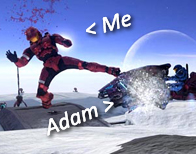 The other day, while ostensibly playing a rousing game of Halo 3 online, we were debating over the headsets about the affect technology has on our society: our communities, our relationships, our connectedness. Adam took the side that believes that technology is forcing a wedge between individuals, destroying a sense of community, and creating a generation of lonely, depressed individuals.

So that you can fully understand the irony of his position, let me pause here and explain that Adam lives about 9 hours away from us. I’ve known him since he was about 7, but with our move to the States have only been sporadically in-touch with him, using various technologies. The telephone being something of an old technology that neither of us employ frequently (or with much skill) we’d, until XBox Live, been communicating only over the occasional e-mail or brief IM conversation. It wasn’t until I got an XBox that Adam and I were even able to communicate voice-to-voice on a regular basis. In fact, we “hang out” in a virtual world, talking (or debating) in each other’s company at least once a week now. (The fact that he regularly destroys me at Halo has nothing to do with my point.)

Adam argues, like many Luddites in our society, that suicide rates are higher in high technology areas; that the relationship with a “pen pal” is much closer than one with someone on your friends list; that most people with an Internet connection have never even spoken to their next door neighbors.

While its hard to argue the statistic about suicide, I have to maintain that correlation does not necessarily indicated causation. My reality is that not only does technology not drive a wedge between me and my relationships, but it is a significant key into making those relationships continue to work. A few examples, aside from the obvious one about XBox Live:

– Skype + Webcam: Without this technology my parents would have seen their grand-son Benjamin a total of maybe 3 times in his life. This despite the fact that my parents are not technologically adept, and certainly aren’t “early adopters” of anything geek related (although they’re holding their own.) Granted this technology is nascent and has a long way to go before its a normal part of every day life, but despite its quirks and bugs, my parents in Kuala Lumpur are regularly able to see and talk to their grandson in upstate New York.
Without this technology we’d be relegated to photos or videos sent in the mail (both of these things being technology as well, just slightly older). The (almost) live, two-way communication would be gone.

– Blogs: Once the domain of uber-geeks with coding skills, baby blogs are sprouting up all over the Internet. There are all different kinds — from the bullet-point blog post to the photo blog — and yes, there are a few truly awful ones, but this technology is to human communication in the 2000s as the printing press was in the 1400s. Publication of works is now something that belongs to the individual.
Despite being a huge blogger, and blog-enthusiast with a good dozen blogs on my daily blog-roll, I’m going to pause here and concede a point or two to Adam’s position. A blog can be dangerous to relationships when it is passively consumed. Too many people are used to the position of sitting on the couch, eating up the content that faceless network providers stream to their head-cavities through the TV. Those who haven’t yet grasped that the Internet is a two-way media that expects and even demands that they participate in what they’re consuming, ruin the advantages of blogging.
Simply put, if you read blogs but do not produce one, or at the very least comment on and participate in the blogs you visit, you are a leech. You are a Luddite of the most severe kind, who by sheer complacency damages the potential not just of a technology, but of a relationship…

– Instant Messaging: IMs and Texts have all but replaced the phone call of yesteryear. Yes, this technology is fraught with problems — it can be difficult to ascertain emotion or sarcasm, a multi-threaded conversation can become confusing, its slower than a phone call — but I’d argue that all of these are worth over-coming.
IM is live, but allows for time to come up with a thoughtful answer.
Its on-demand, but allows for delays due to circumstances or multi-tasking.
And its presence-sensing, which is something a telephone can never do, allowing you to indicate your availability for a conversation instead of being rudely interrupted during a meal or mating activities.
I don’t think it will ever completely replace the telephone, but between IM and Video Conferencing, I do believe the telephone will be relegated to less use.

Throughout history there have been those who decried the invention of new technology. I’ve listed only 3 (4 if you include XBox Live) that are commonly painted as harbingers of the end of civilization as we know it. But the fact is, my life, and my family life are better because of all of these things.
I’ll agree that, like any technology, the Internet can be used for evil. Just like the telephone, MySpace can be used to harass someone. Just like a book, a web page can be used to incite hate. And just like a magazine, a URL can be used to distribute smut. But all of these things can also be used for incredible good — to foster communication and grow relationships.

Just remember that its a two-way street. There are those of us who bravely forage into new frontiers of the web, to discern uses for new technologies — you call us “geeks” but that’s OK. The faster we learn how to communicate with each other, the faster we can make these technologies usable for the average person. Your responsibility then, is to dive in, embrace these new ideas and tools as soon as you can, and use them to build community…

Thoughts? Disagreements? Explain in the comments, and help create community…