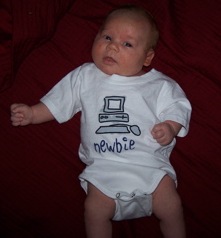 We got in the car at about 9:00 last Thursday morning, for our 8 hour drive home, without a clue of what to expect from Benjamin. Nic prepared us for almost anything, packed us a lunch in case we couldn’t stop, and had cash on hand in case we had to stop, but it turns out that Benjamin doesn’t mind long drives at all. Almost every time he needed to eat, we were ready for a break anyway, and most of the time he cried we could solve it by turning up the volume on the music, or driving a little faster (he has a need for speed, like all Wise boys). We hit some horrific snow in Syracuse, but ended up safe back home Thursday night, almost on schedule. Having Benjamin along didn’t really slow us down at all.
Friday we ran errands in the morning, Nic visited her old work, and we took Ben to meet his great grandpa, and in the afternoon we parked our butts at Pam’s place and visited with some friends who dropped by. In the evening my parents threw a family thing, with all the aunts and uncles in the area, who showered Ben with gifts, despite my protests. He didn’t sleep well at all during the weekend — I think he could tell he was in a new place, so he fussed a fair bit, but it was good for my family to meet him.
Saturday we did breakfast in Aylmer and prepared to receive Nic’s well-wishers. I suspect there were easily 60-70 people who arrived during the day, also with gifts, and made noises and funny faces at the baby — who was surprisingly calm through the ordeal. It’s starting to look he’s gonna be an extrovert like his mom, cause while I was about ready to find a rock to hide under, he was gurgling away happily all afternoon. And we did appreciate all the people who came to wish us well.
Sunday morning we went to St. Thomas for church, caught up with a few friends, then went to lunch with our other family. I got to play Excite Truck for the Wii, but we didn’t get to have a Red Alert tourney cause we hurried out the door for our next appointment at Mark and Lis’s, where some pregnant couples and some of our former students came by to observe me changing a diaper and chat about parenthood. Then it was out the door again to Port Stanley for another baby showing — this one a lot quieter and a lot more relaxing.
Monday we drove on gas fumes (I refuse to fill up the car more than once while we’re home, cause that would mean we’re doing wayy too much driving) into London, to visit my old friend Randy in jail. I thought that would be the most challenging visit of the trip, but it turned out to be pretty encouraging. He’s excited to meet his own son, when he gets out in May, and promised me (yet again) that he’s never gonna end up in an orange jumpsuit again. Who knows where Randy ends up next, but I chose to believe he’s gotten it together this time.
The drive back to New York was entirely uneventful — which was just fine with us, cause we were exhausted. I was not relishing returning to work the next day, but it seemed that God had held off the snow just for us. We were totally safe the whole way home, and then totally unable to do anything but veg on the couch for the next two days! I hate being cold, but I couldn’t help but be grateful for the weather-imposed vacation.
I was pretty productive yesterday, nailing down my to-do list pretty fast. And at some point I knew I’d have to go out and rescue our vehicles from the mountains of snow they were covered in. Nic dug out my car, and I had hoped to drive her SUV right out of the snow — only to find that it wouldn’t start. I ended up crawling around in the snow trying to get it free enough that I could jump start it. It did start-up, but it’s still making weird noises and vibrations and smelling kinda funny. Fortunately, my wife is surprisingly handy, so now that it starts and can move around, she’s confident that with a little advice from her dad, she can have it purring again. It might seem strange to some of you guys that my wife is handling this man work, but trust me it’s cool. She knows how to drive a bulldozer and I don’t, so I have a lot of faith in her.
In conclusion: trips home are great, but don’t count as vacations; snow days, however, do count, and we should have more of them; and girls who fix cars are hot.
Thank you to everyone who got us gifts, made the drive to see us, and arranged your plans so that you could spend some time with us and our baby. It was good to see you all!