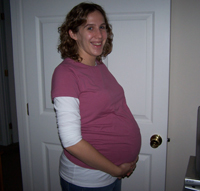 Do you ever remember that when you where a little girl you would play dress up? Well me and my sister would put on my mom’s high heels and put white slips on our heads and pretend to be getting married…how weird is that at that age. Also for as long as a can remember I have been looking at the Sears catalog picking out baby stuff I would like to get someday….this was when I was in 9th grade….even weirder!
Now I did eventually get to wear a real veil and my own high heels and walk down the aisle (and a dress too people!) but if you look at the picture of me walking down the aisle it looks like I’m not impressed but I was trying really hard not to cry. You see I was so happy I couldn’t believe this was happening to me, someone who thought they would never ever meet someone they could see themselves marring especially at such a young age. We had our lives pretty much planned out when we were dating for 6 months (we had just turned 18). We were going to get engaged when we were about 20, married a year later and Jon would be done school and I would have 2 years left of University.
Well as most of you know the schooling part didn’t work out like we planned but we still got married and started our life together. We had also planned to start having kids when we were 25 or so (well we’re close) but we had a bit of a scare when we were 23 and we realized that we really wanted to have kids so a couple months later we started to try but it wasn’t that easy. We weren’t really trying hard but we thought if it happens it happens but about a year later I was getting frustrated and Jon hated to see me like that.
So I went to a specialist but I had to wait to start the treatment till we got home from Asia because they have to monitor you (which means taking blood from you twice a month…eh I hated that!). So I was to go on Clomid for 6 months and then if nothing happened we would talk about what to do next. Well by the end of the 6 months we were in the States and still nothing. So I started to get things in order with getting referred from one doctor to the next till I got one with an infertility specialist. We talked and decided on the next thing to do was to get my charts from Canada (which was in April and they just arrived in October!) and wait for my next cycle to begin.
After being off Clomid for two months I was 2 days late….but with me that is no big surprise because I’m very irregular (sorry guys). Jon happened to come home for lunch, I don’t remember why, but I know he was frustrated with me always thinking I might be pregnant and turning every little thing into a symptom. But this time it was a little different or so I thought but he wasn’t convinced. So he told me to take a test and give him a call. Well those stupid test make you wait like 3 minutes before you find out — I know, I had done a lot!! Well I peed on the stick and sat and stared at the clock….only this time I couldn’t wait and checked it at 2 minutes. Oh and I have to say I spent more money this time and bought the test that actually says Pregnant or Not Pregnant….I hated looking for the lines, what colour do you think that is, are there two there or am I just seeing things, are there any lines?! Anyway I look down and it said Pregnant and I just lost it….I thought this is so not true…after so many negatives you almost don’t actually expect to get a positive to appear but it did. I tried to compose myself as I called Jon but as soon as he answered the phone I started crying again and I can’t imagine what was going through his mind at the time but I finally got out that “It said yes” and he’s like “What said yes” and I kept saying that. Finally he figured it out and was also surprised. So I took another 2 days later just to make sure and made an appointment to get tested at the doctors and both came back positive.
Finally after 2 years, almost to the day, we got pregnant and it took awhile for it to sink in that what we had been praying for the last 2 years was finally happening. Looking back on the 2 years we noticed that if we had got pregnant at certain times that we wouldn’t have been able to do some of the things we were able to do so we knew then that God had planned it all out. But we were just not being patient enough and listening to him that it will happen, just give it time.
And here we are 5 weeks and 4 days to go and I almost can’t believe it’s that close. I’m starting to get a little nervous but I know this wouldn’t have happened unless we were ready for it to happen so that adds some comfort but I do have to wonder why do girls have to cry so much. I mean this is what I have been wanting for over 12 years but I’m still scared….I made it through 5 years of marriage I should be able to handle a newborn, right? I hope so……